KIDS PARADE W/ THE 501ST AND REBEL LEGIONS
11:00:00 - 11:30:00
Taco Bell/KFC Costume Contest Stage
All kids attending C4 are invited to meet up with the costumers from the 501st and Rebel Legions and take part in a rousing parade fit for an Emperor. Join the Legions as they march throughout the convention floor and into the main lobby of the Grand Traverse Resort- officially opening the convention floor for the day.

KIDS HALLOWEEN TRICK-OR-TREAT AT C4
11:00:00 - 16:00:00
Specially Marked Exhibitor Booths on the Convention Floor
What better way to spend Halloween than trick-or-treating? They showed off their cool costumes in the contest, then marched through the show floor to scout out where the best treats are hiding- now it's time for the kids to collect the spoils of Halloween by trick-or-treating through the convention floor! Look for the specially marked booths throughout Governor’s Hall for participating exhibitors. Parents: don’t forget to bring a trick-or-treat bag!

SPOTLIGHT: VERONICA TAYLOR
12:00:00 - 13:00:00
Outback Steakhouse Panel Room
Trainers, get ready for an adventure! Join the original Ash Ketchum, Veronica Taylor, as she discusses her iconic role as the aspiring Pokémon Master! There is sure to be plenty of discussion about the Pokémon community, voice acting, and what it takes to be the very best- considering Veronica’s undeniable imprint on cartoons, anime, and video games. Kids big and small alike- be sure to bring your questions for this once in a lifetime discussion!

STEVE LAVIGNE: MICHAELANGELO SPEAKS
14:00:00 - 15:00:00
Outback Steakhouse Panel Room
One Leads. Another, cool- but rude. The third: does machines. And then… there’s the party dude. In the early days of Mirage Studios, Eastman and Laird may have brought the Teenage Mutant Ninja Turtles to life, but they did so with their very first in-house artist at their side- the one and only Steve Lavigne. Steve- widely known as the inspiration for Mikey’s personality, sits down to discuss the early days of Mirage, the explosion of the pop culture phenomenon known as TMNT, and his indelible mark on the franchise as it hit its merchandising stride. This is a must-attend for 80’s and 90’s kids and Turtles fans of all ages! 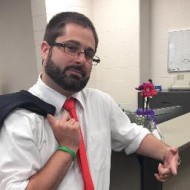